The days of good, ol’ fashioned internal memos are not over. Sure, we probably don’t have our secretaries type them up, photocopy them, and distribute them. They’re most likely shot out via e-mail, but the nature of a memo remains the same.

They’re intended to distribute information to a large group of people. When an internal memo goes out (in lieu of a quick e-mail), folks usually know to perk up their ears and give it a good read. Internal memos call attention to a problem, clarify a matter, make recommendations, proclaim important announcements, and more.

The long and short of it is this: internal memos signal a note-worthy message, so we have to craft them with the finest attention to detail. Here are the ins and outs of how to write an internal memo.

To begin with, it’s important to title your message. You can simply write “MEMORANDUM” in the top left-hand corner. This will establish your memo format neatly and signal that this is an important piece of correspondence.Â

Below that, a simple, “TO: All Employees” will suffice. Or, you might need to be more specific. Either way, establishing a professional memo format from the top is important.

Then, even if it’s obvious who the memo is coming from, be sure to include a “from” line. Follow a similar format and opt for something like, “FROM: Jules Smith.”

Finally, indicate what it’s all about. Like an e-mail subject line, you’ll write something along the lines of, “SUBJECT: Four Weeks of Vacation Time for All Employees.”

From the heading, you can jump straight into the body of your message. You don’t have to include salutations or anything of that nature because you took a moment or two on your heading.

One of the most important elements in your message is your tone. Do you want to come across sounding stern, disappointed, threatening, or supportive? Readers will pick up on your tone immediately, so keep it in the forefront of your mind as you write.

From there, here are a few structural details to incorporate into every internal memo template:

Although your memo won’t require a salutation, you can include a signature at the end. Something simple like this will suffice:

And there you have it! An internal memo is meant to signal important news. They shouldn’t slip through the cracks or be overlooked. Keeping your employees’ thoughts and emotions in mind will help you approach the memo with the right tone and, hopefully, anticipate a lot of their questions.

When it’s time to button up your suit and write a highly proficient internal memo, we hope these tips will help you pull it all together.Â

You have learned in previous chapters that part of the legal profession involves a large quantity of writing. Complaints, answers, discovery documents, motions and legal memoranda (sometimes called “briefs”) make up a large part of a court file.

In its memorandum to the court in support of its motion for summary judgment, Hal, the plaintiff’s attorney, argued that “the party of the first part coveted to convey its entire interest in the subject real property to the party of the second part.” The court, unhappy with the language, instructs Hal to rewrite his memorandum, excluding any legalese. In his revised memorandum, Hal writes, “The seller agrees to convey its entire interest in the property to the buyer.” The language is clearer, fewer words are used (thus generating less paper), but the message is still the same.

Words like “heretofore”, “hereinafter”, “hereinbefore”, “aforementioned”, etc., should be avoided whenever possible.

The “Brief” or Case Summary

Legal memoranda are sometimes called “briefs”. The word “brief”, however, has another meaning – it refers to a short synopsis of a case. Instead of reading a 25 page case, for example, many attorneys will ask their clerks (or their associates) to summarize a case – or to “brief” the case. The brief will give the attorney the information he or she requires, to decide whether the case is relevant and worth spending the time to read in depth.

Briefs should not be longer than one to two pages long and should be easy to read so that the reader does not have to spend much time understanding the reasoning of the case.

You have already learned, in previous chapters, about the use of legal memoranda. To recap, legal memoranda are used in connection with motions, both pre-trial and post-trial. Occasionally, during trial, the court may ask for a memorandum on a particular legal issue.

The courtroom, however, is not the only arena in which legal memoranda can be involved. Attorneys will often ask clerks (or associates) to prepare a legal memorandum about a particular legal issue. This memorandum is used within the law firm and serves to inform the attorney about the legal issue, and includes citations to legal authorities. It will also point out a split of authorities or ambiguities in the law, if applicable. It is important that the attorney to whom the memo is addressed is informed of all aspects that are relevant to the issue, not just information that is favorable to your side of the case.

This particular memorandum is a persuasive document. The memorandum must include a legal argument and should contain legal citations that support the legal arguments being put forward in the memorandum. However, it should be noted that attorneys have an ethical duty to disclose any and all binding legal authority that is contrary to their position in their documents. Of course, it will often be the task of the drafter of the memorandum to try to convince the court that the contrary case should not be applied to the facts of this case.

The top of the first page of a memorandum being submitted to the court should have the proper caption as required by the local rules of the court, followed by the proper title of the memorandum.

Julie represents the plaintiff in a motor vehicle accident. In support of her motion for summary judgment, Julie includes in her memorandum the following: “On the evening of January 3, 1992, the plaintiff was traveling in her automobile in a westerly direction on Main Street in the city of Myertown, when her car was suddenly and violently struck by the defendant’s automobile, which was being operated by the defendant. As a result, the plaintiff sustained serious physical injuries for which she has brought this action to recover damages. It is the plaintiff’s contention that the defendant negligently failed to stop at the stop sign as required by law. The plaintiff has respectfully moved this court for summary judgment on the ground that there is no genuine issue of material fact and that the plaintiff is entitled to judgment as a matter of law.” 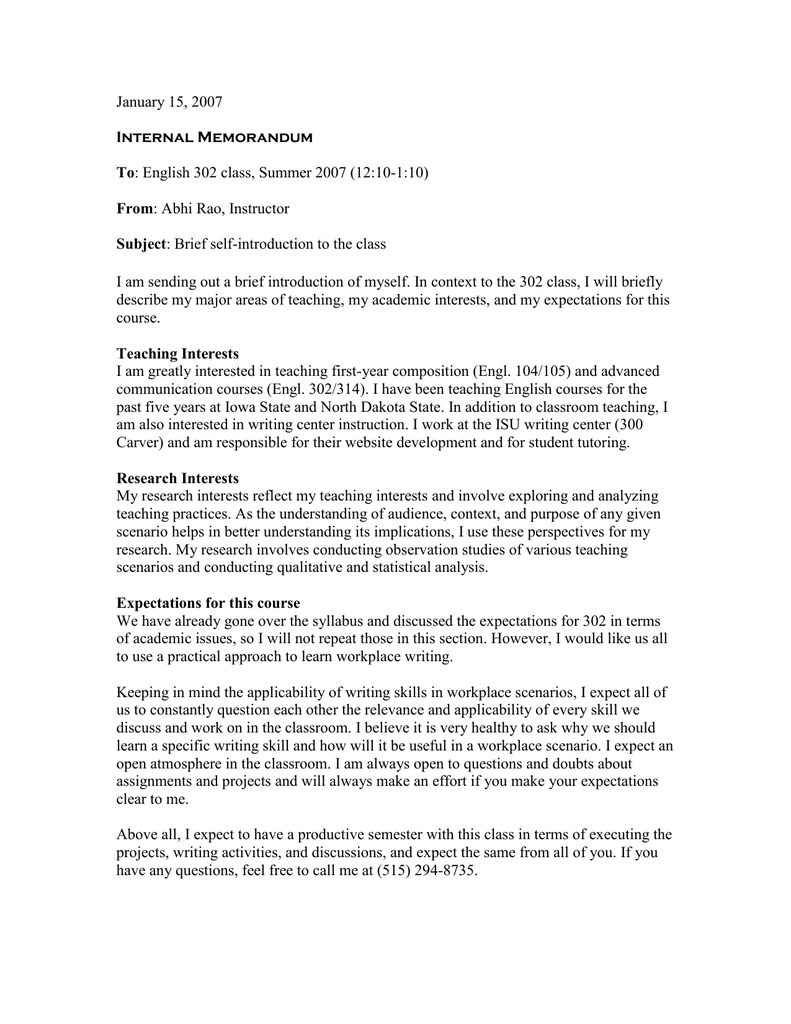 To focus the reader’s attention, the memo should always include a statement of the issue addressed. For example: 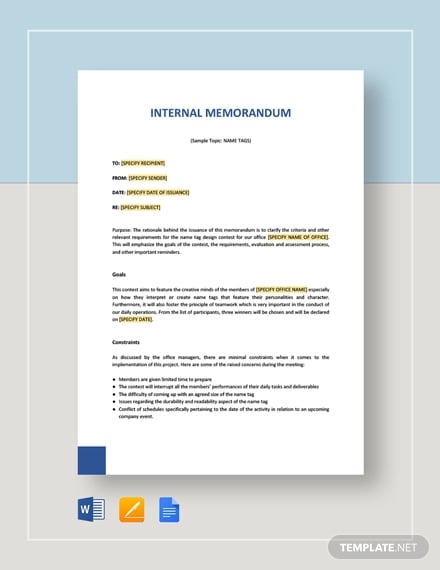 Following her statement of the facts, Julie includes the following issue: “This memorandum addresses the issue of whether an operator of a motor vehicle who fails to stop for a pedestrian in a crosswalk is inherently liable for negligence.”

The longest, and most important, part of the memo is the discussion section. This is the section in which the party’s argument is maintained, legal authority is cited, and conclusions of law are drawn. 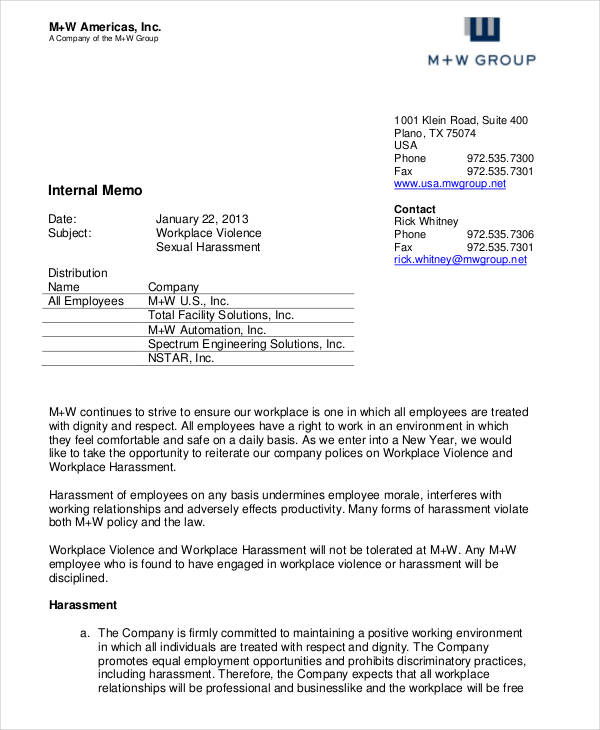 Finally, the last section in the memo is the conclusion, which summarizes the arguments contained within the memo.

The first part of the internal legal memo is the heading, which usually looks like this:

Within the heading, the two most important parts are the date and the subject, or 're:' (pronounced “ray” or “ree”) line. The date is important because it lets the reader, who may not be the original recipient, know when the memorandum was written. It is assumed that all of the law cited within the memo is current as of that date. The 're:' line is important because it instantly focuses the reader’s attention. Often, internal memoranda are kept in research files for future reference – and thus, the 're:' line offers a quick guide to the memo’s contents.

The memo should begin with a statement of the issue, which is the legal question that the memorandum addresses. For example:

“The issue addressed by the memo is whether the operator of a motor vehicle is inherently liable for negligence for striking a pedestrian in a crosswalk.”

“This memo addresses the issue of whether a corporation that distributes shares in its organization must register with the United States Securities and Exchange Commission.”

The next paragraph, or series of paragraphs, should offer a brief answer to the issue. The purpose of this brief answer is so that the reader does not have to read the entire memorandum to understand the resolution of the issue. Citation to authority is not absolutely necessary in this section, but it may be included if deemed appropriate.

It is not essential to include a brief statement of the facts giving rise to the issue, but it is rarely a bad idea to do so. If the memo specifically discusses the pertinent law and then applies it to the facts giving rise to the issue, it must also discuss the facts, or the memo will not be as effective. If the memo is a strict discussion of law, the facts may not be important; they will always provide, however, a frame of reference. Because the resolution of a legal issue can turn on one seemingly minute fact, the inclusion of facts is often useful.

The largest portion of the memo is the discussion section. It is in this section that all legal analysis occurs, as well as any application of the law to the facts giving rise to the issue. As explained above, all attorneys have an ethical duty to inform the court of authority contrary to their position; therefore, it is essential that the internal legal memorandum discuss all aspects of an issue, including contradictory authority.

Order of citation of authorities

Quite often, attorneys and other legal practitioners will wish to cite more than one judicial decision, statute, or other legal source to support their argument. A list of two or more citations is called a string citation. One may not simply cite with abandon every source that supports an argument – authorities must be cited in a particular order in a string citation. If one authority is more important or authoritative than the rest, it should be cited at the beginning of the string citation.

Generally, federal statutes should be cited before state statutes. For statutes, those enacted most recently should be cited first, and then the rest should follow in reverse chronological order.

Cases should be cited in similar fashion – federal cases should precede state cases. The United States Supreme Court should be cited before any other federal court, followed by courts of appeals and then district courts. If more than one case is cited from the same court, the cases should be listed in reverse chronological order (i.e., most recent first). Decisions from courts of appeals need not be organized by circuit, however – they are treated as if they are the same court, to be ordered in reverse chronological order. Decisions from the district courts are treated in the same way. For example:

Note that the two cases from the Second Circuit are not listed together, but are listed, with the Third Circuit’s decision, in reverse chronological order.

Citation of more than one state court decision is similar – always begin with the highest state court, then the appellate level, and, finally, the trial court level. The decisions from each level should be listed in reverse chronological order. If the string citation contains decisions from more than one state, the citations should be listed alphabetically, by state. Within each state's decisions, the previously discussed rules regarding court rankings and reverse chronological order apply.