FastAPI is a modern, high-performance, batteries-included Python web framework that's perfect for building RESTful APIs. It can handle both synchronous and asynchronous requests and has built-in support for data validation, JSON serialization, authentication and authorization, and OpenAPI (version 3.0.2 as of writing) documentation. Tutorial - User Guide - Intro¶. This tutorial shows you how to use FastAPI with most of its features, step by step. Each section gradually builds on the previous ones, but it's structured to separate topics, so that you can go directly to any specific one to solve your specific API needs.

Copy that to a file main.py.

In the output, there's a line with something like:

That line shows the URL where your app is being served, in your local machine.

You will see the JSON response as:

You will see the automatic interactive API documentation (provided by Swagger UI):

You will see the alternative automatic documentation (provided by ReDoc):

FastAPI generates a 'schema' with all your API using the OpenAPI standard for defining APIs.

A 'schema' is a definition or description of something. Not the code that implements it, but just an abstract description.

In this case, OpenAPI is a specification that dictates how to define a schema of your API.

This schema definition includes your API paths, the possible parameters they take, etc.

In that case, it would mean the JSON attributes, and data types they have, etc.

OpenAPI defines an API schema for your API. And that schema includes definitions (or 'schemas') of the data sent and received by your API using JSON Schema, the standard for JSON data schemas.

If you are curious about how the raw OpenAPI schema looks like, FastAPI automatically generates a JSON (schema) with the descriptions of all your API.

It will show a JSON starting with something like:

The OpenAPI schema is what powers the two interactive documentation systems included.

And there are dozens of alternatives, all based on OpenAPI. You could easily add any of those alternatives to your application built with FastAPI.

You could also use it to generate code automatically, for clients that communicate with your API. For example, frontend, mobile or IoT applications.

FastAPI is a Python class that provides all the functionality for your API.

FastAPI is a class that inherits directly from Starlette.

You can use all the Starlette functionality with FastAPI too.

Here the app variable will be an 'instance' of the class FastAPI. 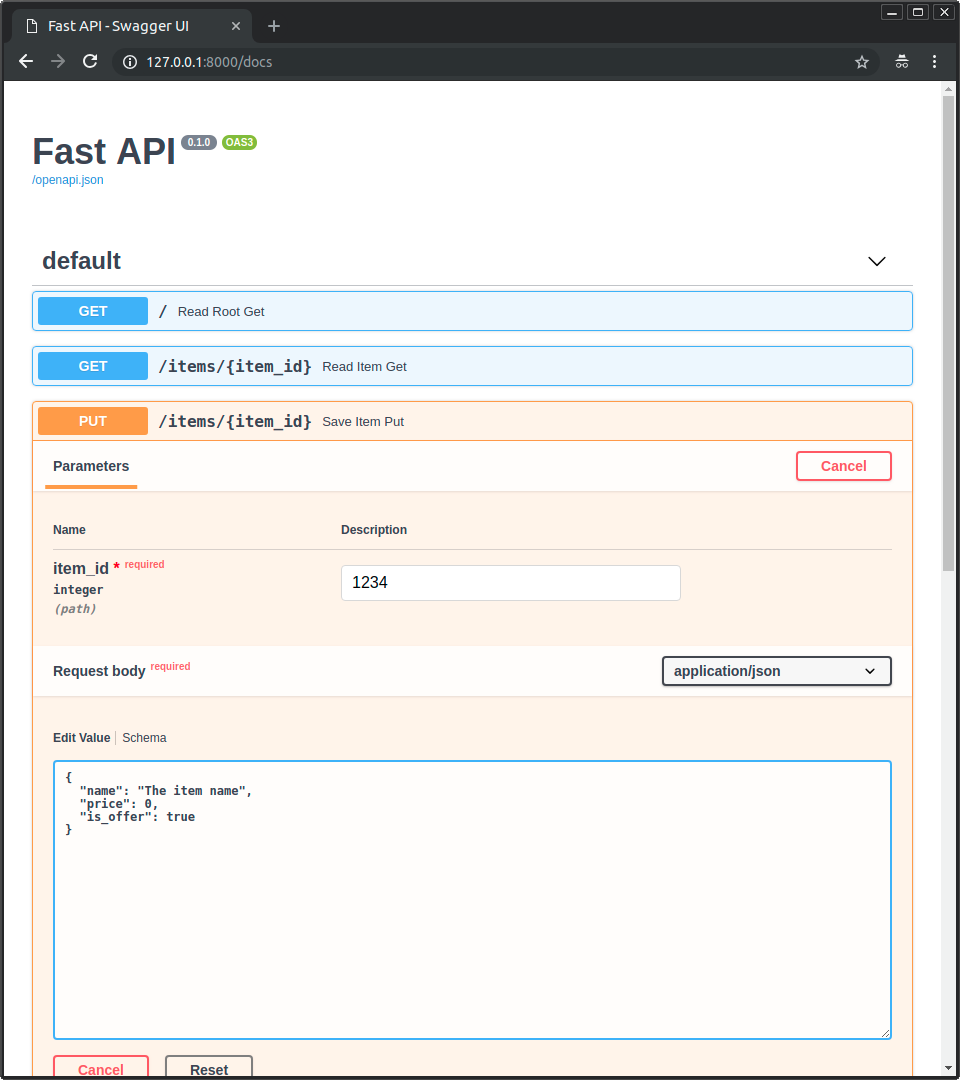 This will be the main point of interaction to create all your API.

This app is the same one referred by uvicorn in the command:

And put it in a file main.py, then you would call uvicorn like:

'Path' here refers to the last part of the URL starting from the first /.

A 'path' is also commonly called an 'endpoint' or a 'route'.

While building an API, the 'path' is the main way to separate 'concerns' and 'resources'.

'Operation' here refers to one of the HTTP 'methods'.

...and the more exotic ones:

In the HTTP protocol, you can communicate to each path using one (or more) of these 'methods'.

When building APIs, you normally use these specific HTTP methods to perform a specific action.

So, in OpenAPI, each of the HTTP methods is called an 'operation'.

We are going to call them 'operations' too.

The @app.get('/') tells FastAPI that the function right below is in charge of handling requests that go to:

That @something syntax in Python is called a 'decorator'.

You put it on top of a function. Like a pretty decorative hat (I guess that's where the term came from).

A 'decorator' takes the function below and does something with it.

In our case, this decorator tells FastAPI that the function below corresponds to the path/ with an operationget.

It is the 'path operation decorator'.

You can also use the other operations:

And the more exotic ones:

You are free to use each operation (HTTP method) as you wish.

The information here is presented as a guideline, not a requirement.

For example, when using GraphQL you normally perform all the actions using only POST operations.

This is our 'path operation function':

This is a Python function.

It will be called by FastAPI whenever it receives a request to the URL '/' using a GET operation.

In this case, it is an async function.

You could also define it as a normal function instead of async def:

If you don't know the difference, check the Async: 'In a hurry?'.

You can return a dict, list, singular values as str, int, etc.

You can also return Pydantic models (you'll see more about that later).

There are many other objects and models that will be automatically converted to JSON (including ORMs, etc). Try using your favorite ones, it's highly probable that they are already supported.