Met Opera on Demand delivers instant access to more than 500 Met performances, including Live in HD videos, classic telecasts and radio broadcasts. Download the new iPad app to watch on your TV with Apple TV via AirPlay. Enjoy a free 7-day trial! Rusalka is quintessential Dvorak. And it is one of those operas that's totally entertaining to hear on CD even if you don't know or follow the libretto. I have heard the sets by Neumann and Mackerras and despite their virtues, Chalabala's performance makes Dvorak's score.

Dvořák’s best-loved opera, Rusalka is inspired by Slavic myths and folk-tales about a water-nymph that chooses to become human to win her Prince, mirroring Hans Christian Andersen’s The Little Mermaid.

The opera displays Dvořák’s exceptional gift for melody and orchestration and features the beautiful aria ‘Song to the Moon’.

Our new production is directed by Tatjana Gürbaca (Opernwelt Director of the Year 2013) and conducted by Antony Hermus. Both are making their ENO debuts. 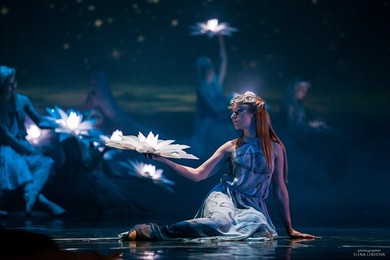 Leading the cast is Corinne Winters in the title role. She returns to ENO after her UK debut as Violetta in La traviata in 2013.

Rusalka Dvorak Song To The Moon

Rusalka Dvorak Song To The Moon

Age guidance 14+. This production contains a violent scene in Act 3 which some may find unsettling.