Castel Sant'Angelo, the scene of the aria

'E lucevan le stelle' (English: 'And the stars were shining') is a romanticaria from the third act of Giacomo Puccini's opera Tosca from 1900, composed to an Italian libretto by Luigi Illica and Giuseppe Giacosa. It is sung in act 3 by Mario Cavaradossi (tenor), a painter in love with the singer Tosca, while he waits for his execution on the roof of Castel Sant'Angelo.

Written in B minor, it is one of the most famous opera arias. The vocal range extends from F♯3 toA4. The aria is considered part of the spinto tenor repertoire.[1]

The aria is introduced by a somber clarinet solo. The incipit of the melody (heard in outline earlier in the act, as the sky lightens and the gaoler prepares for the execution) is repeated on the lines 'O dolci baci, o languide carezze' ('Oh, sweet kisses and languorous caresses'), and also restated in forte in the closing bars of the opera, as Tosca jumps from the ramparts.

In 1920, the stage performer Al Jolson, together with Buddy DeSylva and Vincent Rose, wrote a popular song, 'Avalon', about the town of the same name on Santa Catalina island. The following year, G. Ricordi, the publisher of Puccini's operas, sued all parties associated with the song, arguing that the melody was lifted from 'E lucevan le stelle'. Puccini and his publisher prevailed in the case and were awarded $25,000 in damages and all future royalties for the song. 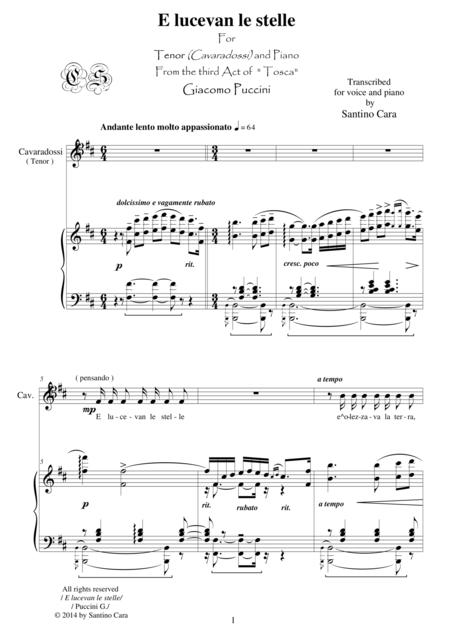