A selection of 48 of Woody Guthrie's most popular and widely performed songs with complete lyrics, piano music, and guitar notations. Wonderful reproductions of Woody's original artwork. It also includes a selected discography. Edited by Judy Bell and Nora Guthrie.

(Richmond Music Folios). A deluxe edition featuring 48 of Guthrie's legendary songs along with a bio, introduction, complete lyrics, a discography, photos and sketches. Songs include: Jig Along Home. Roll On, Columbia. Sinking of the Reuben James. This Land Is Your Land. Tom Joad. and more. Fact 1: Woodrow Wilson 'Woody' Guthrie lived from 1912 to 1967. Fact 2: Fact 3: Guthrie was blacklisted from employment opportunities during the Red Scare. MacCarthyites officially blacklisted more than 300 people between 1945 and 1960. Fact 4: Guthrie reminded Dylan, 'I ain't dead yet' during their first meeting. The quote eventually became a lyric in Dylan's 2012 song 'Early Roman Kings. Every 100 Years Centennial Songbook $20.00 Available for the FIRST TIME Woody's classic songs along with NEW songs from the Woody Guthrie Archives!

All Work Together
Biggest Thing That Man Has Ever Done
Bling-Blang
Cleano
Dead or Alive
Deportee (Plane Wreck at Los Gatos)
Do Re Mi
Dust Bowl Blues
Dust Bowl Refugee
Dust Can't Kill Me
Dust Pheumonia Blues
Dust Storm Disaster
Dying Miner
East Texas Red
Going Down The Road (I Ain't Going To Be Treated This Way)
Grand Coulee Dam
Grassey Grass Grass
Gypsy Davy
Hard Travelin'
Hard Work
Howdi Do
I Ain't Got No Home
I've Got To Know
Jackhammer John
Jesus Christ
Jig Along Home
Little Seed
Mail Myself To You
My Daddy (Flies A Ship In The Sky)
New York Town
1913 Massacre
Oklahoma Hills
Pastures Of Plenty
Philadelphia Lawyer
Pretty Boy Floyd
Put Your Finger In The Air
Ramblin' Round
Riding In My Car
Roll On, Columbia
Sinking Of The Reuben James
So Long It's Been Good To Know Yuh (Dusty Old Dust)
Takin' It Easy
Talking Dust Bowl
This Land Is Your Land
This Train Is Bound For Glory
Tom Joad
Union Maid
Vigilante Man
Why Oh Why
Woman At Home

Twenty-seven years in the making (1940–67), this tapestry of nearly two hundred American popular and protest songs was created by three giants of performance and musical research: Alan Lomax, indefatigable collector and preserver; Woody Guthrie, performer and prolific balladeer; and Pete Seeger, entertainer and educator who has introduced three generations of Americans to their musical heritage.

In his afterword, Pete Seeger recounts the long history of collecting and publishing this anthology of Depression-era, union-hopeful, and New Deal melodies. With characteristic modesty, he tells us what’s missing and what’s wrong with the collection. But more important, he tells us what’s right and why it still matters, noting songs that have become famous the world over: “Union Maid,” “Which Side Are You On?,” “Worried Man Blues,” “Midnight Special,” and “Tom Joad.” 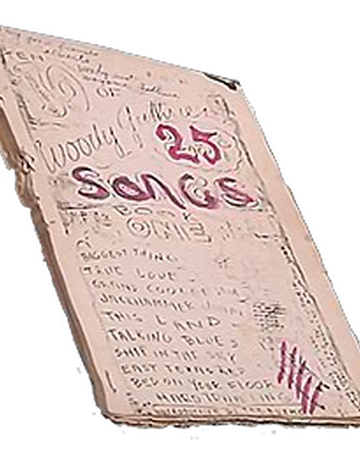 “Now, at the turn of the century, the millennium, what’s the future of these songs?” he asks. “Music is one of the things that will save us. Future songwriters can learn from the honesty, the courage, the simplicity, and the frankness of these hard-hitting songs. And not just songwriters. We can all learn.”

In addition to 123 photographs and 195 songs, this edition features an introductory note by Nora Guthrie, the daughter of Woody Guthrie and overseer of the Woody Guthrie Foundation.

“Intensely singable. . . . The book is a hard-hitting history and social commentary as well as a songbook.”—Library Journal